The Energy Leaders’ Coalition comprises fourteen of the leading CEOs from the UK’s energy sector who are making a public declaration to improve gender diversity in their companies and in the sector as a whole. Each recognises that there is a rich pool of talented women in the sector who can make a significant contribution to the growth of their business and to the transformation of the UK’s energy sector to meet the challenges of the coming decades.

Members of the Energy Leaders Coalition (ELC) and the ELC Charter

Each member has signed up to the ELC Charter which can be read here. 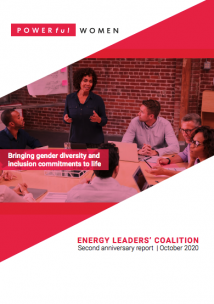 Two years on from its establishment, the Energy Leaders’ Coalition – now with 14 members from the leading companies in the UK energy sector – has published its second anniversary report.  It reviews progress the companies are making against their targets to improve gender diversity and inclusion within their own organisations and across the energy sector as a whole. It reveals the good work each organisation is doing in case studies that others can learn from. – ‘recipes for inclusion’. And it sets out plans for year three to overcome remaining barriers in a shifting world.

The Second Anniversary Report can be read here. 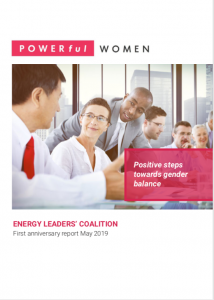 In May 2019, the leaders of eight of the UK’s top energy companies – competitors who between them represent 56,000 employees – came together to address an issue that matters to them: gender balance. Why? Because the energy sector is facing an unprecedented transformation – into a smarter, more flexible, low carbon energy system with new customer expectations – and these business leaders no longer want to miss out on a significant pool of female talent and expertise.

So what has the Energy Leaders’ Coalition achieved in its first year?  This anniversary report sets out the research the companies have done over the past 12 months to identify barriers to gender balance and some of the initiatives they are already implementing internally to feed the pipeline of future female energy leaders. It also sets out what their plans are for year two and the positive steps they are committed to taking towards better gender balance.

The First Anniversary Report can be read here.

Read the Press Release of the anniversary report here.

“At Subsea 7, we’re committed in offering you a place for innovation, an environment where you can thrive, and a career you can be proud of. We work hard to make our workplace fair, respectful, diverse, and inclusive for everyone, and take pride in the truly global workforce we have. No doubt we still have work to do to improve female representation in our company, that’s why our membership of the coalition is a declaration of our commitment. At Subsea 7, we believe that a diverse workforce is not only good for business, but more importantly, it’s the right thing to do.”

“At E.ON, we believe our people are crucial for the future success of our business and critical to achieving our UK purpose of leading the energy transition. I’m proud of the work being done across E.ON to improve the diversity of our workforce and pledge my personal commitment to making sure that we continue to create a culture where everyone’s welcome, can be themselves and achieve their full potential. Joining the Coalition helps us to challenge ourselves to keep improving and working towards our goal of achieving gender diversity at all levels.’’

“SSE believe greater difference causes broader debate, leading to better decisions and ultimately improved business delivery which is why we are fully committed to improving diversity and inclusion in its widest sense.  SSE was one of the first FTSE 100 companies to publish its gender pay gap in 2016 and has a plan to make SSE a more inclusive employer. As part of this we have implemented a wide range of targeted measures to encourage woman in, support women on and encourage women up in the organisation.  We’re making progress but there’s more work to be done and our Coalition will help drive this forward to make meaningful impact across the industry.”

“Wood is influencing positive change in gender diversity as part of our commitment to building a sustainable future for generations to come. Retaining and nurturing brilliant talent and generating the boldest solutions, takes creating a community that welcomes, celebrates and values difference in background, viewpoint and experience. Our membership of the coalition is testament to both our ambition and focus.”

“At BP we have had a gender ambition since 2012 and have actively increased our female representation at all levels of the company. We are passionate about ensuring that all our employees have equitable access to opportunities within the company. We review and improve our processes and systems to ensure that we have consciously inclusive elements built into the way we manage people and we encourage an inclusive culture amongst our colleagues by supporting active and influential Business Resource Groups of which our BPWIN network is the most longstanding. We are delighted to be a part of the Energy Leaders Coalition to push ourselves and our industry to do more in this hugely important area.”

Will Gardiner, CEO of Drax

“Women hold around a fifth of senior roles at Drax – more than the global average for energy companies but we can do much better and I am committed to make that happen, because it’s the right thing to do and diverse and inclusive businesses are more successful. We aim to progress women and people from diverse backgrounds throughout all levels of our business and are taking steps to achieve that from even the earliest stages of career development by working with schools, colleges and universities. Joining the Energy Leaders’ Coalition gives us a helpful forum to learn what works and what doesn’t so we can ensure that we continue to drive meaningful change across a sector that has historically faced a long-standing gender and diversity imbalance.”

“ENGIE has for many years practiced a conscious policy of promoting gender diversity and professional equality – but we recognise that as a business and more importantly as an industry sector there is much more that can be done. As business leaders, we are collectively in a position to drive real change on important themes such as diversity and inclusion. I am delighted to be joining the Energy Leaders’ Coalition and look forward to working closely with all of the members to exchange perspectives and explore ways to continue to take positive steps to increase levels of female representation within our leadership teams and also to ensure we inspire a diverse next generation of talent into a rewarding career in the energy industry.“

“At National Grid we understand that increasing the diversity of the workplace is crucial to ensuring we have the best and most talented people to do our vital work. There is an issue across the energy industry in attracting, promoting and retaining female talent. That’s why initiatives like Powerful Women are great forums to help us come together to drive not only gender diversity but inclusion of more women in senior roles within the energy industry.”

“I’ve seen first-hand in Good Energy that a diverse workforce, and a gender balanced board, make for a better business. Not only that, there’s also evidence that gender diversity could be a part of our switch to a greener future in the energy sector — we know that sustainability focussed businesses tend to be more balanced. That’s why, whilst it’s positive we have seen some progress in women moving into senior positions in energy, it’s absolutely crucial that this change continues to accelerate.”

“I have always believed that a diverse workforce is the best way to drive success in an organisation and we’ve already seen with the emergence of the gender pay gap this year, the underrepresentation of women in senior roles brought more front of mind for business leaders than ever before. We’re proud to join the Energy Leaders Coalition and hope to lead by example by showing how gender diverse teams with strong leadership can deliver far greater levels of innovation, creativity and success for our business.”

“At RWE we know that diversity is crucial. There is both a moral and business imperative to ensure everyone has equal opportunity to develop, progress and be rewarded at work. By being an active member of the Energy Leaders Coalition we can learn from others, lead by example and together drive impactful change, not just within our organisation but across the sector as a whole.”

“We are proud to be supporting the Energy Leaders’ Coalition as it launches today. Having a more representative workforce makes good business sense. Historically there has been a high percentage of men working in the energy sector, and we are tackling this issue. We still don’t have enough women in senior positions.  We are committed to ensuring women take up more senior roles in our organisation, including developing the support networks to help them advance.  The new Coalition will allow us to share knowledge effectively and work collectively to increase gender diversity and encourage change in our industry.”

“Our industry is adapting to a changing energy system. For Shell to lead in the energy transition, we need to be a true meritocracy. We need to attract the best talent and enable those individuals to thrive and fulfil their potential. Diversity, in all its forms, will be how we find the best solution to the challenges and opportunities ahead. For us, it makes good business sense to support and empower women at every stage of their career.”

“At Cavendish Nuclear we recognise that diverse teams generate better ideas, better decision making and better business outcomes. This is why Cavendish Nuclear has pledged its full support to the Nuclear Sector Deal commitment of 40% of women in the nuclear sector by 2030. As part of this, we are proud to be joining POWERful Women’s Energy Leaders’ Coalition, to work collaboratively to inspire more women to consider a career in the energy sector and in engineering.”

Read the press release of the launch of the Energy Leaders’ Coalition here.