How to … be a Leader not a just a Manager

In the latest in our “How To…” blog series, we welcome Emma Pinchbeck, Deputy Chief Executive of RenewableUK, to share her ideas on what leadership looks like in the modern world.

At the end of 2018, I hosted a POWERful Connections Breakfast for female rising stars in the energy sector. I’d like to continue that lively conversation, so here’s my personal take on what it means to be a leader, now that I find myself – sometimes to my own surprise – often referred to as one.

“Support the women you know in senior positions today to do things differently, so that we have images of leadership that are more suited to the 21st century.”

Good managers aren’t necessarily good leaders. Leadership is not just about ticking all the boxes on your daily ‘to do’ list, managing your teams effectively, or accurate budget forecasting. My CEO routinely describes me as “fundamentally unmanageable”, which is probably not something I should publicly acknowledge. But my point is, your suitability for an Executive or Board role seems to be judged on much more nebulous qualities:  your principles, your diversity of experience, your ability to inspire change.

These “other” qualities are the ones to find and nurture through your personal development programmes; if you want to move from being an operator to become a leader then your presentation skills can be as important as your knowledge of Prince 2.  I have lost count of the women I’ve spoken to who are (often rightly) furious about being passed over for a promotion when they’re getting through twice the amount of work as their colleague. But the truth is that you’re probably being assessed on all of those other skills too.

“In a leadership role, who you are is important to those buying into your vision.”

Focus on Being Human(e)

One easy way to picture the difference between a manager and a leader is to think about whether you’d trust a robot doctor. Many of the delivery bits of jobs, even white-collar management jobs, could some day be done better by non-humans (I will leave my treatise on whether this is sensible for society for another blog). But the question is: even if you knew the robot Doctor had a better track record of accurate diagnoses, would you trust it with your mum’s life – or would you want her care to be, well, more human?

“Try to avoid becoming someone else’s idea of a good leader.  Don’t act a role, inhabit it.”

My theory on modern society, despite and especially because the robots may be coming, is that we need to value and exemplify qualities at work and in society that cannot be programmed: individuality, creativity, humour, and authenticity. Corporate boards need to be wise to the fact that employees, especially women, want humane working environments and human leaders who recognise that emotional intelligence is at least as valuable as the artificial kind. In this way, offering flexitime or pay transparency aren’t just about operations but culture, encouraging delegation isn’t about resources but recognising that they need to foster trust and shared responsibilities. 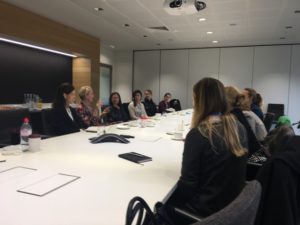 Be Who You Are

The best bit about moving up in organisations has been acquiring the freedom to be more and more myself at work. To be honest, I think some of my progression has been specifically becauseof it. For your own sanity, try to avoid becoming someone else’s idea of a good leader.  Or, in other words, don’t act a role but inhabit it.

I have run out of patience with being told that I am too “nice” or too “talkative” or “too” anything for my role, especially because this kind of feedback has often come from rooms where I’m speaking less than 90% of the men around the table. I’ve taken a literal Executive Decision to stop trying to change things that are fundamental to my personality, and just think about how to nuance them better. For example, my non-apology for having opinions is, “I know I’m being a bit insistent about this issue but I’m really passionate about it”.

Your extra-curricular activities and interests are also good way to develop your leadership style. When I was interviewed at WWF, with little professional people management experience, I talked instead about coaching a national standard rowing crew. One of my most valuable work skills has come from my personal life, because growing up with a close but unconventional family taught me to read people’s agendas better than most.

For most people, life is much more complicated than the version of themselves they offer at the office. But in a leadership role, who you are is important to those buying into your vision. That’s not to say don’t set personal boundaries (no-one needs to see social media photos of me and my university perm) but I would like to encourage you all to think more broadly about where your ideas and talents come from – and be proud of them.

“Presentation skills can be as important as your knowledge of Prince 2.”

The trick to working out what you should change, and what you shouldn’t, is to get feedback from people you trust. The CEO of a major utility recently told me that they found me terrifying when we first met, because I was so intransigent in the discussion we were having. Some years on, I’ve learned from people like them that being aware (and preferably funny) about my own limitations is a much better leadership trait. And, we’ve all got imposter syndrome – but identifying and working out how to deal with genuine weaknesses, with trusted friends or colleagues, is a sign of strength. I will also always apologise for mistakes when I make them, which I do because I like to run headlong at walls.

“I’ve taken a literal Executive Decision to stop trying to change things that are fundamental to my personality, and just think about how to nuance them better.”

And finally…. Leadership is Gendered (sorry)

Study after study has shown that our expectations of leadership have been conditioned by historically seeing men in these roles. We know that the UK energy sector’s leadership is predominantly male. Only 13% of board seats and 6% of executive positions are occupied by women and half the boards of the top 80 energy companies have no women at all, let alone women of colour. Firstly, think about that as a factor if you are ever asked to change your style. Secondly, support the women you know in senior positions today to do things differently, so that we have images of leadership that are more inspiring, more diverse, and more suited to the 21st century. 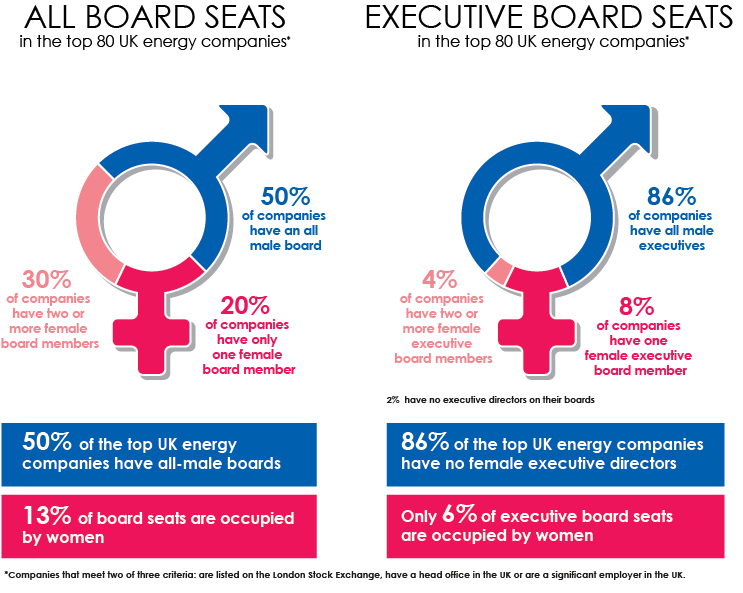