Goodbye and good luck to our fabulous Powerful Woman, Louise

Posted at 10:51h in Latest News by admin
0 Likes
Share 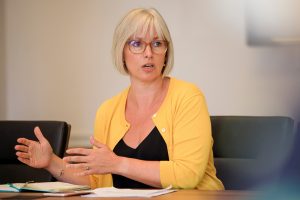 Today’s news that Louise Kingham will be leaving her position as CEO of the Energy Institute in April has been met with a great deal of sadness by all of us at POWERful Women, but also with immense pride at the exciting and important new net zero role she will be undertaking.

The EI, to which POWERful Women is affiliated, has today issued the following statement:

After more than two decades as Chief Executive of the Energy Institute and its precursor bodies, Louise Kingham OBE FEI has announced she will be leaving the organisation in April to take up a new position with BP.

Informing staff of the news, Kingham said, ‘This is an incredibly exciting time for the energy industry. I have enjoyed my time at the EI immensely and will miss the family that exists within the staff team, volunteer base and wider membership. It has been an absolute honour and privilege to be your CEO. Now, new challenges beckon for me and the time has come for someone else to take the helm.’

You can read the full EI statement here.

“Louise has been absolutely instrumental in driving POWERful Women to what it is today. Her deep knowledge of the sector, great strategic thinking, creativity, can-do approach, ability to get things done and, perhaps above all, her capacity to persuade people at all levels to get involved have been just brilliant. We will miss Louise so much but are thrilled about her new opportunity.”

“Louise has been an inspirational leader driving Powerful Women from an idea into a real force for more and deeper diversity across the sector.  Her collaborative but determined leadership is at the heart of all that has been achieved by POWERful Women.  She has personally had a significant impact on the sector, and she will continue to be an exceptional role model across the industry.  We hope that, despite a change of role, we will work together going forward.”

“Louise has, through her commitment, strong leadership and a clear 360-degree vision on where the energy sector needs to be on gender and inclusion, helped to create a sector fit for the twenty first century. She has from the inception of POWERful Women helped drive and steer energy companies to recognise change was not an option but a necessity. We all wish Louise huge success in her new role at BP and thank her for her continued commitment to POWERful Women. There is no doubt that her knowledge and clear vision will remain at the core of POWERful Women’s strategic delivery.”