‘Women in Energy and Leadership’

01 Jul ‘Women in Energy and Leadership’

Posted at 11:57h in Latest News by admin
0 Likes
Share 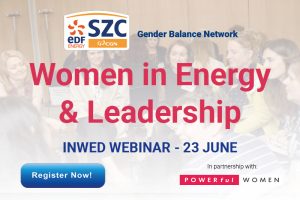 We celebrated International Women in Engineering Day in style this year with a great event, featuring a panel of leading female engineers in the energy sector and attended by over 90 delegates.

Held online in partnership with Sizewell C’s Gender Balance Network, the webinar was aimed at women aspiring to leadership and also at companies seeking to learn how to attract and retain the best talent through effective diversity and inclusion strategies.  It was the first in POWERful Women’s new programme of events, an integral part of support for women in their careers.

And we were delighted to kick off with a star panel: Ayssar Hanza, Executive Director at Ace Energy Group, Emily Spearman, Head of Quality Assurance at Ørsted, and Dr Sarah Williamson, Technical Director for nuclear at Laing O’Rourke and currently seconded to the Sizewell C project. The discussion was expertly chaired by Julia Pyke, Director of Financing at Sizewell C.

Setting the context, Julia reminded us of the current ‘state of the nation’ when it comes to female representation at senior levels in the sector.  According to POWERful Women’s latest statistics, more than one third of the top UK energy companies have no women on their boards at all and more than two thirds have none on their executive committees. “There has been some progress,” said Julia, “but we clearly have more to do”.

All three of the panellists have been successful in rising to leadership positions and began by telling their inspiring career stories.  Each has had a variety of roles along their career journey, including some unconventional routes, in a range of disciplines and sectors. But they all spoke passionately about engineering.

“Engineering is about problem-solving – I always had a desire to save the world and I see engineers as the solution,” said Emily, who described her career as a series of pillars: after a degree in Environmental Engineering she went from hardcore engineering in oil and gas, through consultancy and commercial to her current role in quality for offshore wind.

Sarah is currently directing the civils programme for the Sizewell C nuclear project and described how “When I say my job title, I step back and say ‘wow!’”  She started from an arts background and was the first in her family to go to university. After a Phd and lecturing in structural engineering, she joined the construction sector and rose to senior levels.

Ayssar always had a deep interest in maths and science and dreamed of being an engineer, dreams that her family encouraged. “I was always looking for better ways to do things.”  With a degree in Aerospace Engineering, she started her career in aviation before moving into oil and gas.  Taking a second Masters in Safety Engineering and Reliability really opened up new avenues, she said. And while she encountered obstacles due to her racial background, “I chose not to dwell on them, to just get on with it.”

Asked whether they have driven their careers or been lucky, all three said they’d pushed themselves.  Sarah described how her career has been “a series of offers and good ideas” that she has pursued and places and organisations she has targeted. Emily was inspired by her mother who got a degree later in life: “If you want something you can do it. Ultimately you own your career”. She said it can seem like an uphill struggle, but you have to make sure you have the support to achieve what you want. And Ayssar added, “We make our own destiny. I sold myself by being loyal and flexible and always being prepared to change my strategy, but I never compromised my principles.”

Julia pointed out that all three women’s stories had mentioned being lucky at points in their career, but that in fact “the organisations have been very lucky to have you!”

Moving on to observations on the current state of gender diversity in the energy industry, Julia asked what needs to happen next.  “We need to do more in the workplace to normalize diversity of all kinds,” said Ayssar “and address it holistically and as a partnership.”

Emily noted that only 12% of engineering jobs in the UK are held by women but that for women’s voices to be heard you have to get to a critical mass of 20 – 30%.  And that returning from maternity leave is a challenge for many women.  Citing the IET’s “awesome” STEM returners programme, she said “there is a massive untapped pool of women we can match with opportunities.”  She expressed concern that COVID-19 risks taking women back to the 1950s.  “We must move to unconscious inclusion. Diversity of thought matters.  For my team I have actively sought people who are different.”

Sarah takes the same approach – when it comes to building a team, “don’t look at the wrapper”, she said. “Look at what you need for a melting pot of diverse people and personalities.”  And Julia agreed that it was important for employers to make conscious choices on diversity.

Finally, the event concluded with all three panelists giving their top tips to aspiring women:

A big thank you to everyone who joined our first webinar, to our engaging and insightful panellists and to Julia Pyke and Sizewell C Gender Balance Network for facilitating a great discussion.

Look out for our next online event!